Zak Bagans--in one of his favorite poses.

Let me paint you a picture:

Every other Friday night, I drive to Pennsylvania to see Mike.   When I pull into the drive, he comes down the back steps of his apartment, gives me a kiss and takes my awesomely over-sized L.L. Bean bag from my Forester, and carries it up the stairs.  I follow, checking the bird feeder that I left there for the cardinals that apparently only come around when I visit.

Now, I must make it immediately clear how I feel about Zak Bagans.

•  You can accuse me of it all you want–I do NOT find him attractive.  In fact, my crush lies with Aaron (the one on the far left)

•  His guido-esqueness only adds to the show.

That’s pretty much the extent of feelings I have toward him. 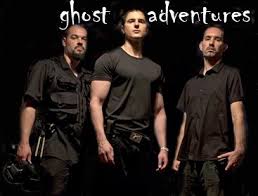 But I cannot stop watching this show.  I am completely addicted to it.  This past Friday, he was trying to seduce a ghost who had a tendency of shagging the living.  Freaking hilarious.  And I don’t know who writes his scripts for him, but the big words that come out of this man’s mouth are most certainly not his.  I do not hate Zak Bagans, and I’m not trying to make fun of him, but the off-ness of the show completely makes it.

As I mentioned before, my ghost heart lies with Aaron.

I think this is because at first, he was just their tech guy to begin with, and when they realized he was a “magnet for paranormal activity,” they let him into the club.

I honest to God do not know what it is about this show that I like. I just get sucked in to the point where I can’t turn away.

But this is my latest addiction.  You should watch it.

I Require an Obsession

When I was 5, I was obsessed with Michael Jackson–I taped my fingers so my snapping would be more effective.  I had knuckle-less, fingerless leather gloves with his signature smeared across them.  I had a white glove covered in rhinestones and glitter.  My Velcro wallet with the outline of his face was always in my purse.  BAD was my first record, and I made my father play it constantly.  My parents taped his concert at Budapest on a VHS, and it was the only thing that would calm me from my tantrums.  And although the “Thriller” video scared the living daylights out of me (what the hell does that even mean?  What are my daylights?  And why are they living?), I watched it every Halloween as I cowered behind my father, secretly wishing that I could go on that date with Michael–as long as he didn’t turn into a werewolf.

When I was a teenager, I obsessed over the Backstreet Boys, spending thousands in posters, t-shirts, concert tickets, videos, and other useless paraphernalia.  I wrote about them, daydreamed about them, listened to them constantly.

Between the ages of 18 and 20, I became obsessed with 80’s rock concerts.  I went to over 25 concerts one summer while I was working at the factory.   I have this jean jacket to make you understand:

In my early 20’s, I became obsessed with diamonds, and with breaking away.

For most of college, I was obsessed with hippy-esque things.  I climbed trees.  I wore jean skirts and peace signs.

When I went to grad school, I was obsessed with leaving North Carolina and holding onto my Ohio roots.

When I lived with Mike, I was obsessed with finding a job.

Now I’m back in my beloved Ohio.  I have a job.  But I have nothing to be obsessed with.  My friends (who are writers) tell me to write, or at the very least to try to publish the book I’ve already written (Mike is convinced this should happen, as well).  I see a few problems with this.

1)  Writing gives me no pleasure.  It still feels like homework.  Like a requirement.  Like a forced act that someone is staring down upon.  I write (wrote) simply with a blue collar draped loosely across my neck.  I did not write about pretentious things.  And because of that, I think that simple writing is often looked down upon.  I get so sick of people trying to do the new hip thing.  This is why I can’t stand lyric essays.  It’s not right.  Just write the story and quit relying on the gimmicks.  When I realized that there was no market for that kind of writing, I quit.

2)  I do not want to publish Leaving Winesburg because I have exposed my little hometown for everything it is–regardless of how dirty or unflattering.  I told it all, because that’s what a good nonfiction writer does.  We tell the truth.  And the truth is that I’m not ready to not be able to go back to my hometown.  If you’ve seen October Road, you understand.  “You can’t go home again.”  My parents are still there.  Some of my friends.  And while I may have exposed some ugly truths to my classmates and professors at Ashland and UNCW, I do not have to expose them to the world.

3)  I fear that my memoir about working in a factory is, in fact, my only story.  I’m not ready to let it go yet, because in all honesty, I’ve done nothing extraordinary since then.

So I need an obsession.  That doesn’t cost a lot of money, because lately, I’ve been a bit of a miser.  I need an obsession that will take up some time, allow me to meet new people.  I do not think this combination exists, but I am open to suggestions.

I said adults should make a point to be more obsessed with things.

‘Like OMG, the BSB were on the AMAs and OMG DID YOU SEE THEM!?”

At one point, I would have spoken like this and not thought a thing about it.

It seems that obsession is expected of you when you’re in junior high and high school.  But once you graduate, damnit, the only thing you better be obsessed about is being an adult.  I think that’s crap.

Don’t you remember the complete and utter joy of having something you loved so much?  I don’t remember EVER being bored as long as the Backstreet Boys were around.  I spent time between classes writing stories in a weathered notebook to my friend, Caitie (who was also obsessed).  We watched TRL on the phone together every day after school so we could see if the Backstreet Boys had come in at #1 to pound their rival N*Sync into the ground.  My walls were plastered.  I spent thousands in junk I’ll never use again.

But I had fun.

Now it seems that the only thing you can get obsessed with is sports…which I understand.  But it’s the same concept.  You have something to look forward to, to talk to people about at the water cooler, to rejoice in and to mourn.  It’s something to preoccupy you that you enjoy.  We just don’t have that anymore.

This is why I still get silly and obsess over things.  I miss that joy.  I miss collecting things.  I miss looking forward to seeing the BSB on TV, or that rush I felt when Caitie and I first bought tickets to a show.

And to be able to trick yourself into thinking that someday, you’d actually meet Nick and Brian, and that they would fall madly in love with you, and that they’d whisk you away to Florida or Kentucky and give you the life you always dreamt about.

Maybe it’s because we lose our innocence.  But isn’t it still fun to dream?  I think adults ought to make a point to be obsessed with more things.  I really do.